While in the waters of Lembeh, Indonesia, diver Pall Sigurdsson and friends encountered a tiny coconut octopus (veined octopus) who had made a home inside a disposable plastic cup. These particular cephalopods are known for making protective shelters out of shells and other found items, such as coconut shells, but Sigurdsson was very concerned about the octopus’ safety inside the flexible plastic container.

While a shell is a sturdy protection, a passing eel or flounder would probably swallow the cup with the octopus in it, most likely also killing the predator or weakening it to a point where it will be soon eaten by an even bigger fish. 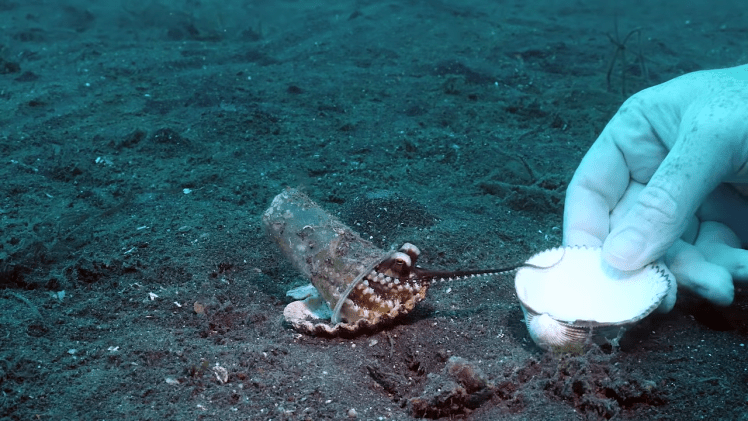 Rather than leave the octopus to a cruel fate, Sigurdsson and friends spent a great deal of their diving time searching for a new shell. They tried several shells, but the octopus didn’t respond until the perfect one was found.

We found this particular octopus at about 20 meters under the water, we tried for a long time to give it shells hoping that it would trade the shell. Coconut octopus are famous for being very picky about which shells they keep so we had to try with many different shells before it found one to be acceptable.