Every Valentine’s Day, quite literally thousands of people converge on Justin Herman Plaza at 6pm to engage in a mass Pillow Fight wherein faces are pummeled, backs are thwacked, and many a giggles had. However, this fun comes at an awful price. Each year tens of thousands bits of feathers, fluff, and foam get strewn across the plaza and they quickly clog the storm drains leaving is toxic debris no other choice but to run into our delicate bay. The other hidden cost behind this spectacle of fluffy carnage is this stress it causes on SF government’s relationship to public art and fun. As you may know, some elements in the San Francisco municipal government are waging a War on Fun. While the primary target of the War on Fun has been the clubs and music venues that enrich our lifes, it also includes public art and the very really cost of the Pillow Fight has and can be used justification to stop other events like the Urban Iditarod or lead to further cracking down on other forms of art like the Obama Street Change. 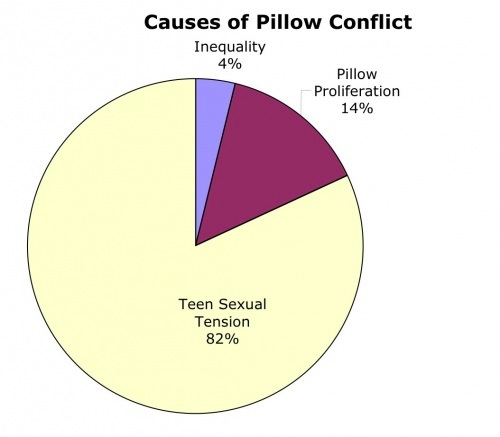 The event has even lead to the U.N. issuing a resolution on Pillow Conflict And Teen Sexual Tension. As Guest Blogger/Part Time UN Commander EDW Lynch reports:

“The United Nations Unconventional Culture Commission (UNUCC) strongly condemns the 2010 San Francisco Pillow Fight and the deplorable attacks on UN pillow inspectors in 2009. A new UN Resolution blames the surge in pillow conflict on an alarming rise in teen sexual tension and the growing influence of radical Talibro pillow extremists, whose testosterone and Red Bull-fueled brosurgency has turned the San Francisco Pillow Fight into a massive melee.”

All of this from some fluff. Ok, a fuckton of fluff. Thus, if you do go to the pillow fight, be aware of its costs and stay to help clean up the mess. Have fun, but don’t be a jerk.