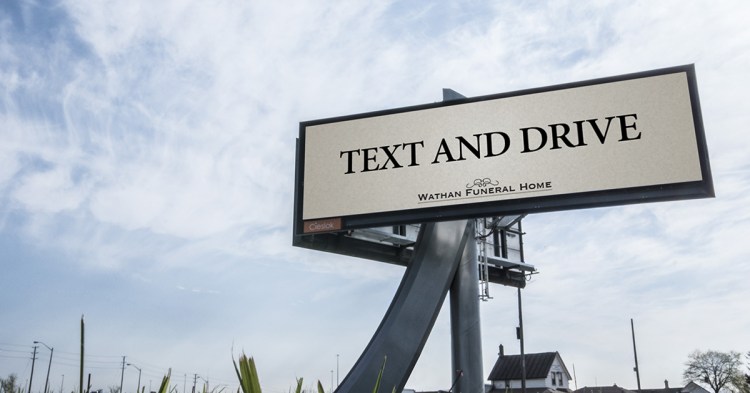 Drivers on an Ontario, Canada road were horrified to see a rather morbid highway sign that simply read “Text and Drive”, advertising the services of the Wathan Funeral Home. Rather than it being a shameless marketing strategy for new business as it appeared to be, the sign was a “public service prank” to alert people to the dangers of texting while at the wheel. The prank was the brainchild of john st., a Toronto interactive agency that clearly knows how to get the attention of the public.

If you’re here, you’ve probably seen our “Text and Drive” billboard. And if you have, you probably came to this website to tell us what horrible people we are for running an ad like that. And you’d be right. It is a horrible thing for a funeral home to do. But we’re not a funeral home. We’re just trying to get Canadians to stop texting and driving, which is projected to kill more people in Ontario this year than drinking and driving. That’s right. More. And while most people wouldn’t even think about drinking and driving, over half of Ontario drivers admit to reading texts while behind the wheel. That’s more than half of the drivers on the road today risking their lives, their passengers’ lives and the lives of their fellow motorists and pedestrians. Which should make you even madder than our billboard did.