Two baby cheetahs who were born in September 1, 2014 at the San Diego Zoo Safari Park’s Cheetah Breeding Facility are being hand-raised by staff due to their mother’s inability to successfully raise previous litters of cubs. The adorable little cubs are being groomed for the Zoo’s Ambassador program, but for right now all they need to do is eat, sleep, play and be really, really cute.

The nearly three-week-old cubs are growing quickly and now weigh around 3 pounds each. They are becoming increasingly active now that their eyes are open and their vision is becoming clearer. Animal care staff says that these cubs are full of personality, noting that at only a few days old, the youngsters were already swatting and interacting with each other. “Every baby’s different, but these cheetahs really seem to be developing quickly in our eyes,” said Eileen Neff, lead keeper, San Diego Zoo Safari Park. “They are great eaters, they started playing when they were just three or four days old. They could barely walk at that time, so it was pretty interesting seeing them tumbling around with each other.” These cubs with be animal ambassadors and each will be paired with a domestic dog for companionship, as are all ambassador cheetahs at the Safari Park and San Diego Zoo. The dog’s body language communicates to the cheetah that there’s nothing to fear in new or public surroundings, which relaxes and calms the cheetah. 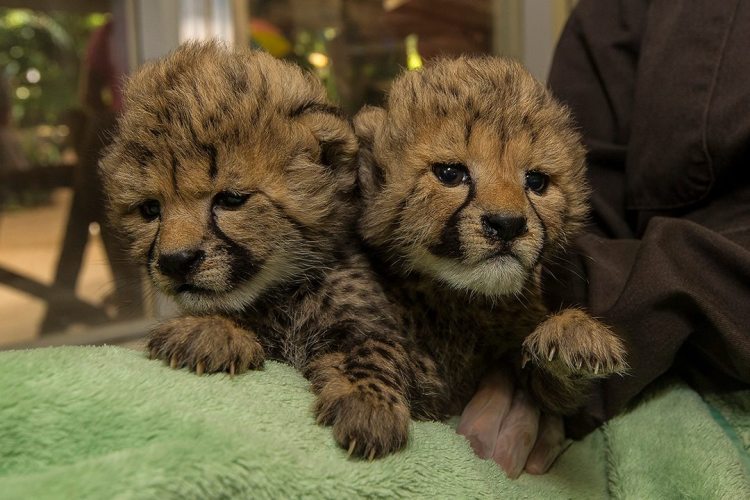