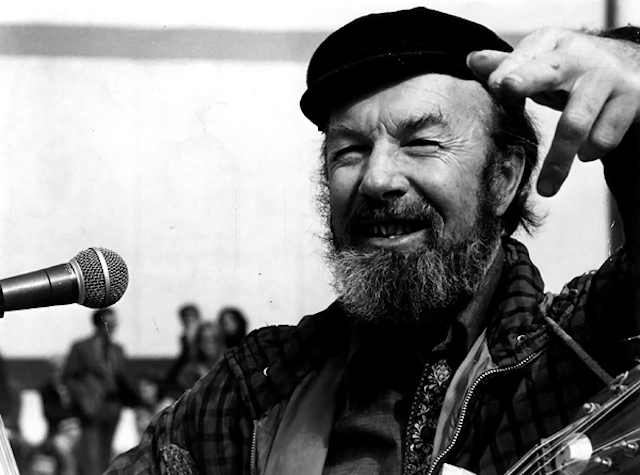 Pete Seeger, the legendary folk singer and activist who led the revival of American Folk music in the mid-twentieth century, died on Monday, January 27, 2014, in his home in Beacon, New York at the age of 94.

Pete Seeger was an extremely talented musician who tried to create awareness through music. During World War II, Pete Seeger was a member of the very political The Almanac Singers founded by Millard Lampell, with Lee Hays and Woody Guthrie. The group disbanded due to government intervention over the band’s politics.

In 1950, Pete joined the The Weavers, a folk quartet comprised of former bandmate Lee Hays, Ronnie Gilbert and Fred Hellerman. The group focused primarily on American folk songs, labor songs, international songs, blues, gospel and ballads. They also disbanded due to the government pressures of McCarthyism as they were blacklisted by the House Committee of Un-American Activities.

Pete went on as a solo artist after the disbanding of The Weavers, tackling such issues as war, global disarmament, unions, civil rights and the environment through his songs and activism. His gentle manner, good humor and velvet voice made Pete Seeger a mentor to artists such as Bruce Springsteen, Bob Dylan and Neil Young and an inspiration to many, many more.

Interview with “Democracy Now”/Waist Deep in the Big Muddy

What Did You Learn in School Today

Wimoweh/Where Have All the Flowers Gone”

If I Had a Hammer

Once upon a time, wasn’t singing a part of everyday life as much as talking, physical exercise, and religion? Our distant ancestors, wherever they were in this world, sang while pounding grain, paddling canoes, or walking long journeys. Can we begin to make our lives once more all of a piece? Finding the right songs and singing them over and over is a way to start. And when one person taps out a beat, while another leads into the melody, or when three people discover a harmony they never knew existed, or a crowd joins in on a chorus as though to raise the ceiling a few feet higher, then they also know there is hope for the world. Pete Seeger via Good Reads

Thank you Mr. Seeger for giving us hope. The world will miss you.