Arnold, the very intelligent octopus at Octolab, was given another puzzle to solve. A transparent plastic wall with adjustable slots was put between him and his beloved barrel. Arnold had to squeeze through these slots, which grew increasingly smaller, in order to reach the other side of the wall with his barrel.

We’re constantly being told that an octopus can fit through any hole. As long as he can fit his beak through a small space, his entire body will follow. We decided to test this out ourselves. …In no way was the octopus in this video placed in harm’s way at any time. The octopus in this video weighs about 4 pounds (1.8 KG). He measures approximately 30 inches (76cm) from the tip of one arm to the tip of the opposite arm when he’s stretched out. The spaces he attempts to go through in this challenge are
0.70 inches (1.7cm)
0.79 inches (2cm)
0.98 inches (2.5cm)
1.18 inches (3cm)
1.38 inches (3.5cm)

After making an amazing number of successful attempts, Arnold decided that was absolutely done. 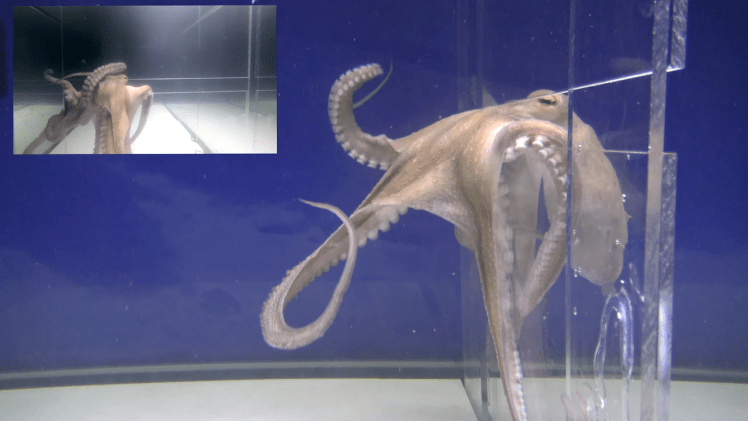