NIMA by San Francisco company 65Sensor Labs is a sleek, portable and convenient smartphone-enabled sensor that sniffs out gluten in approximately two minutes and responds with a smile display if the food is gluten-free and safe to eat. This is especially important for people who have celiac disease or severe wheat allergies. The company has also stated that they are looking into adding other ingredient modules in the future.

Nima is the device that allows you to test your food for unwanted ingredients, starting with gluten. Other ingredients to follow. …Nima can test foods ranging from soups and sauces to fried items and baked goods. Just take a tiny sample of food, put it in a capsule, and put the capsule in Nima. Nima works hard so you don’t have to. Nima is the fastest gluten tester on the market, letting you know if there is 20ppm or more of gluten in food in just over 2 minutes. One-time-use capsules are pre-loaded with our proprietary chemistry and ready to go as soon as you are. No cleaning, no re-setting, no refilling. Just grab a new capsule for every test. Nima fits in a pocket or purse. Bring Nima to dates, vacations, business meals, or wherever you’re eating. 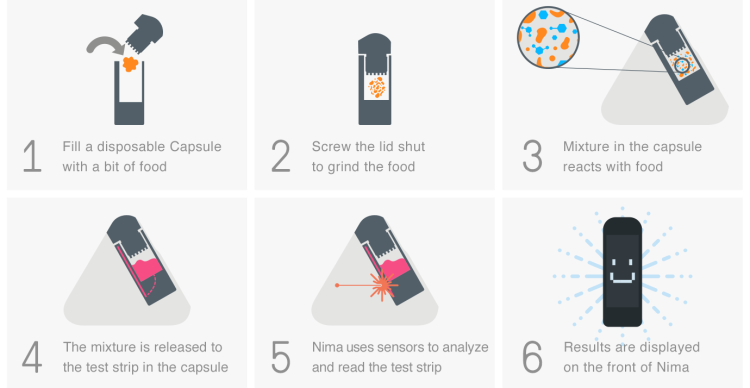