An elderly Aldabra Giant Tortoise named Jonathan recently celebrated a birthday at the Plantation House on Saint Helena Island. Jonathan’s age is estimated to be between 160 and 185 years, and while the old guy has a few ailments that inevitably come with age (cataracts, poor sense of smell, weight loss), Jonathan is as randy as ever.

St Helena’s celebrated giant tortoise may be 160 years old – or is it 180? – but the sound of his exertions can regularly be heard echoing off the walls of Plantation House, the home he graciously shares with St Helena’s governor…The oldest of St Helena’s five giant tortoise goes about his recreation “very noisily,” according to Joe The Vet (Joe Hollins), “and is very fond of the littlest female”. Joe is every bit as relieved as Jonathan. “In truth, libido is one of the first things to suffer with ill health, so it’s a good sign.” – St. Helena Online

According to Joe the Vet, the life expectancy of a giant tortoise is around 150 years, but Jonathan’s life “may be extended by the cool winters.”

Earning its name as a former prison for slaves and a quarantine station for Zanzibar and the mainland, nowadays the island gives you the chance to escape for some peace and quiet. The island lies just off the Old Stone Town, it is also a home to giant land tortoises that were imported from Seychelles in the late 19th century. Now it is more commonly known as a home of Zanzibar’s Giant Aldabran Tortoise colony, some of which are over a hundred years old! This endangered species came to Zanzibar as a gift from the government of the Seychelles. – Eco & Culture Tours Zanzibar 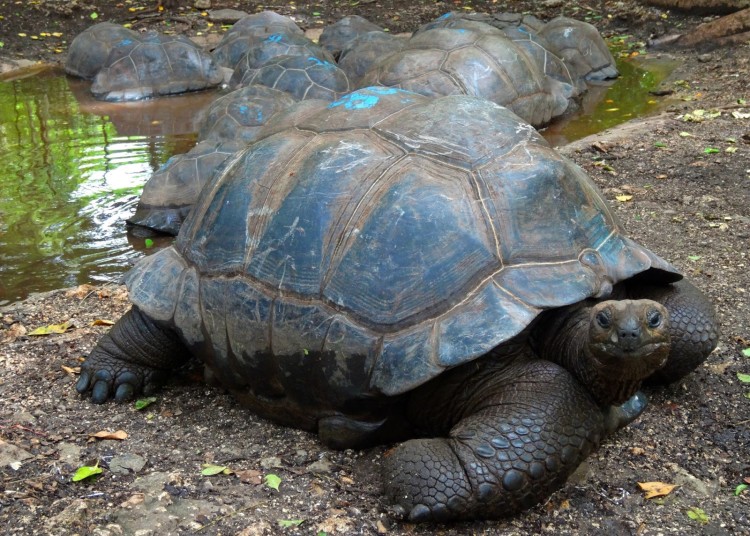 Animalist explains why certain animals, like these tortoises, live much longer than others.