When Shelly Roche of Tiny Kittens, a feline foster home in Fort Langley, British Columbia, brought in a pregnant homeless cat named Eve after a roundup, she decided to live stream Eve giving birth to her kittens in order to educate the public about the importance of spaying and neutering in order to reduce the number of homeless animals on the streets.

Eve is one of the 22,000 feral + stray + abandoned cats in Langley, BC. She was someone’s pet, but was abandoned sometime in February. Luckily, she was rescued during our recent Unwanted Kitten Roundup. We are expecting babies in mid-April. Mom and babies will be spayed/neutered and adopted into loving homes. …Our rescued mama-to-be, Eve, is in pre-labor and we’re expecting babies any time now. Watch our HD livestream at http://tinykittens.com – we’ll be broadcasting live 24/7, so you can follow along with this little family from birth to adoption. Eve is one of the 22,000 homeless cats in Langley, BC. Sadly, there are not nearly enough homes for the thousands of unwanted cats and kittens out there reproducing. You can help save lives by spaying and neutering your own cats and watching Eve instead! Plus, there’s no mess and it’s way less work.

Eve wound up giving birth to five kittens yesterday and Tiny Kittens is currently holding a kitten-naming contest in which the public can submit their suggestions along with a donation, and the person who makes the highest donation will win the opportunity to name a kitten. The only rule is that the name has to be a palindrome–spelled the same backwards and forwards–just like their mom, Eve. So far, three of the kittens have been named. The first-born male ginger kitten has been named Otto, the fifth-born male has been named Siris, and the third-born female kitten has been named Izzi. The remaining two still need names.

Here’s the amazing video of Eve giving birth to her adorable litter of palindromes. 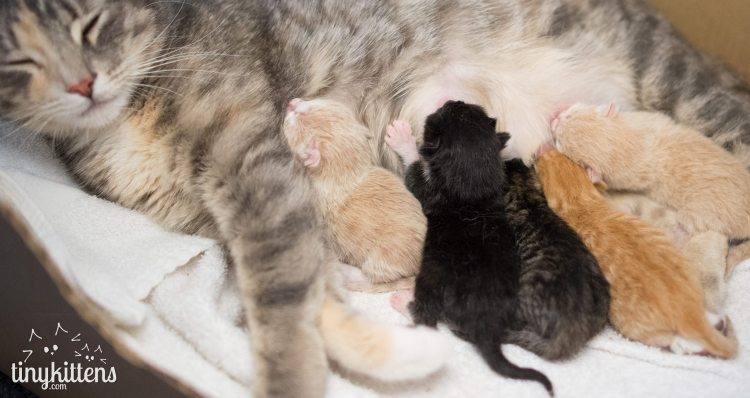