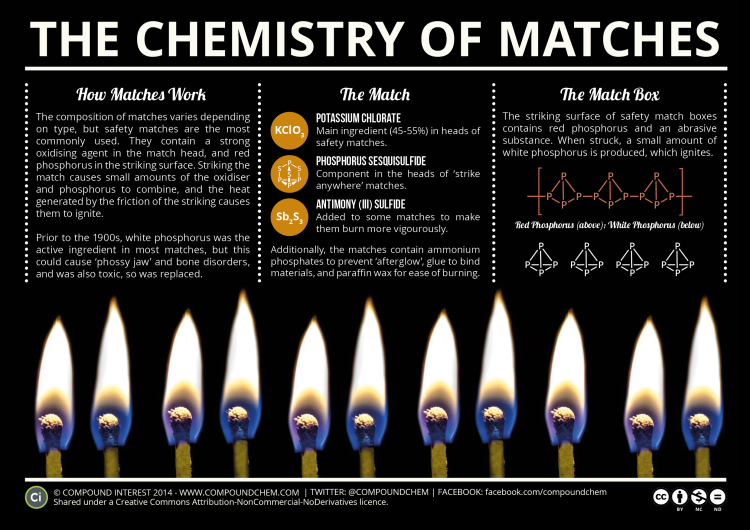 Compound Interest has created an illuminating infographic to accompany their blog posts about the history of safety matches and the chemistry behind what makes them light when struck.

The first that can be called “friction match” was invented by John Walker in 1826, using potassium chlorate, sugar and antimony trisulphide on sand paper to ignite it. The British chemist never thought much of his match and never even patented the invention. However, a few years later, Charles Sauria realised the potential and perfected the earlier version by replacing antimony sulphide with white phosphorus. …Although they were manufactured over a number of decades, the toxicity of white phosphorus slowly became apparent. The long term exposure to white phosphorus of those making the matches led to ‘phossy jaw’ – an affliction which caused toothaches, major swelling of the gums, disfigurement, and eventual brain damage. …The problem was solved when in 1850 it was discovered that heating white phosphorus at 250 degree Celsius produces a reddish inert material (red phosphorus). This certainly made a safer alternative to produce matches, but the real leap in terms of safety came when in 1859 the reactive ingredients were separated between the head of the match and a special striking strip.

We previously posted about a beautiful video shot by filmmaker Alan Teitel at an amazing 4,000 frames per second demonstrating, in slow motion, the fascinating chemistry of a match being struck.