While promoting a Breaking Bad themed fundraising event through Omaze, actor Aaron Paul (Jesse Pinkman) decided to show off the interior of the famous RV where the unlikely duo prepared their first batch of meth in the first few episodes of the series. Expecting the RV to be empty, Paul was surprised to find that Bryan Cranston (Walter White) had been down on his luck and living there for quite a while, unable to let go of the fact that the series ended five years ago.

So I’m just an actor who’s broken down, can’t get over the fact that his show has been finished for five years, and so I’m living in an RV and using a bucket as a toilet. …Oh, well I’m sorry, Aaron! I’m so sorry I can’t be young and hot and rich and rolling with a bunch of friends like you.

What do you get when you put me, @aaronpaul_8 and an RV together? Find out for yourself with a chance to cook (a meal) with us in the RV! Just a little something EXTRA special to celebrate 10 years of Breaking Bad. You want in? Enter NOW: https://t.co/ancXsOxs8j pic.twitter.com/biIJPk5PL7

In all seriousness though, the two actors are participating in an experience in which a random winner and friend will get to “Cook with Bryan Cranston & Aaron Paul in the Breaking Bad RV“. All proceeds of the contest will go to the National Center for Missing and Exploited Children and the Kind Campaign.

It’s been 10 years since Breaking Bad’s groundbreaking premiere, and you’re going to celebrate in the coolest way possible! You’ll pack your favorite tighty whities and fly to LA with a friend to check out the actual RV from the show. But wait—did you hear someone knock? It’s Bryan Cranston and Aaron Paul, and they’re here to cook! That’s right, the real Walter White and Jesse Pinkman will join you in The Krystal Ship to whip up some delicious food, take tons of pictures and bond over the most addicting show ever made. Flights and hotel included, b*tch! 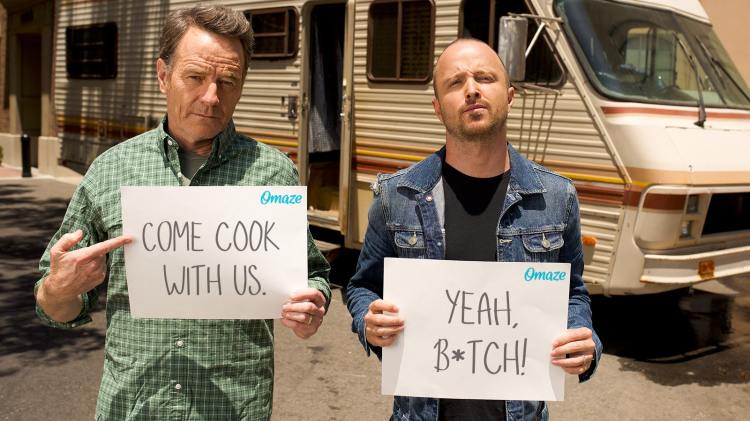