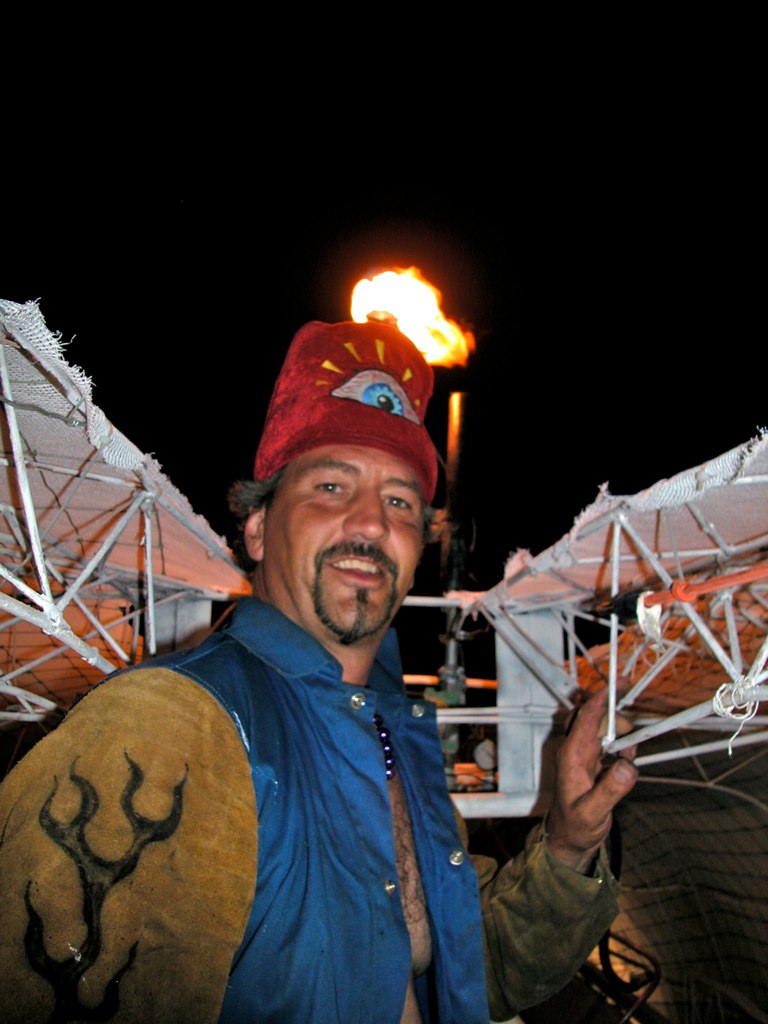 We lost one of our very best. Tom Kennedy (1960-2009) drowned at Ocean Beach on Sunday, April 12th at 2PM. Tom was an artist, activist, teacher, prankster – a strong friend, bright spirit and true inspiration to each and every of the thousands of people he touched through his powerful and loving art and his huge and giving heart. I first met Tom at Burning Man 94 when he came out from Texas with his amazing art car “Ripper the Friendly Shark”, forever raising the bar at that event for creativity and originality in personal expression. I was dumbfounded by the whimsical nature, bold concept and execution of the piece. But more importantly, I was floored by Tom’s unmitigated joy at just being there, alive and creating the world around him. 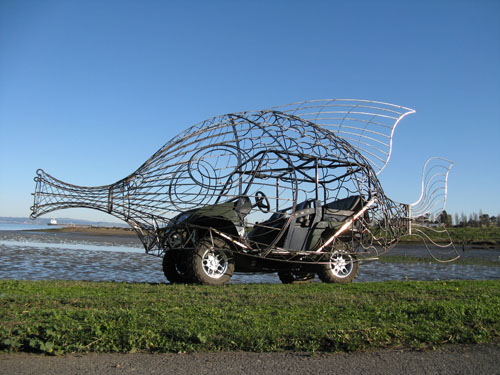 He went on, often in collaboration, sometimes alone, to create many of the most engaging and whimsical art cars you would find anywhere in the world. Tom was one of the kindest and sweetest men I have known. His big, muscular presence was that of a gentle giant, a protector and a gentleman. Tom’s sense of fairness and justice was as powerful as his creative urges. He was no push over, though. His work as an art provocateur and activist was tough, funny as hell and very “in-your-face” for those he saw as oppressors and forces of evil in the world. Greedy businessmen, slimy politicians and the like were the hapless targets of his art wrath. Along with his wonderful wife and partner Haideen Anderson and a cast of dozens in the political satire group Missile Dick Chicks, Tom stuck it to the high and mighty, often at personal risk. His courage and convictions were never in question. I saw him arrested in NYC for the 04 Republican Convention – an event that cost him greatly. This indignity only fired his passion to confront the injustices he saw and to mock and indict those responsible. Tom was generous, selfless and productive in ways that lesser men could only stand in awe of. He helped an untold number of aspiring artists with his powerful presence, practical fabrication knowledge and unique aesthetic. He did what the very best always do – he gave it away. 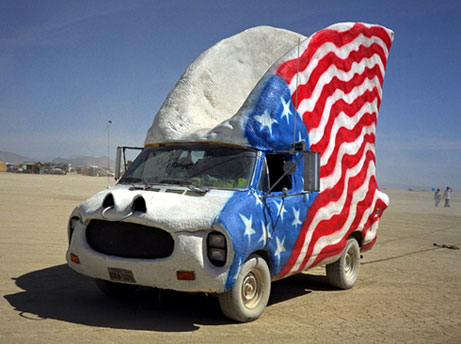 I spoke with Tom’s room mate Chris de Monterey and was told the basic facts regarding how this tragedy occurred. Tom and his friend Mike Tackaberry were in the surf about waist deep at Ocean Beach (stairway 24 – just south of the Cliff House) and were knocked over by large waves and swept out to sea by a very strong rip-tide. Both strong swimmers, they fought to swim back to shore. Mike turned back to help Tom he saw he needed assistance. He was able to bring Tom to the beach where he attempted CPR. EMT’s arrived and took over, eventually transporting Tom to a local hospital where he was pronounced dead. UPDATE 1: Tom’s website has been updated regrading his passing. Plans are being made for a memorials around the country.

UPDATE 2: There are two email addresses for all things related to remembering Tom and submitting stories, images and condolence notes, plus an email specially for helping with the celebrations of his life across the US.

Pat Kennedy, Tom’s mom, is collecting stories and pictures for a work of art she is making in Tom’s memory. If you have something you want to write, or have written, or an image or a condolence note you can email pictsandstories@tomkennedyart.com to help on this grand snapshot of the man , that so many have been enhanced by.

If you have anything else from ways you want to help and be part of the upcoming celebrations in Oakland, Portland, Minneapolis, Houston, or New York (or even elsewhere) email to everythingelse@tomkennedyart.com.

UPDATE 3: Here are some photos of the Tom Kennedy memorial in San Francisco.