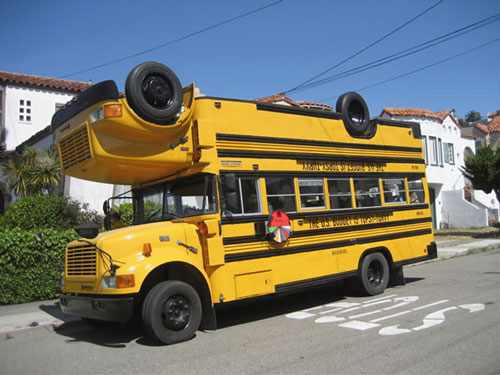 The Topsy-Turvy Bus (“Topsy”) is two school buses welded together, one upside down on top of the other, that is currently touring the country to “dramatically depict America’s upside down budget priorities”. The bus was created by mega art car artist Tom Kennedy in Oakland with a team of 10 artists, who have a background working on art car and Burning Man projects.

The idea for Topsy-Turvy came from Ben Cohen, co-founder of Ben & Jerry’s and president of Business Leaders for Sensible Priorities along with artist Stefan Sagmeister. Tom and Haideen Anderson are currently driving the bus around the US, blogging about their adventures, with stops planned in New Hampshire and Iowa for the presidential primaries.

“Our nation’s spending priorities allow crumbling schools, millions of children with no health coverage, dependence on Middle East oil and deficits as far as you can see,” said Ben Cohen, president of the Priorities Campaign.

“I’m a guy whoâ€™s been looking to use art cars for social change, and Kennedy is a guy who wants to make art cars for a living with some social purpose,” Cohen said. “Clearly, we were both searching for each other.”

Here are some photos of Topsy-Turvy from Ken Duffy, Gary Wilson and Jessica Maass.