In 2015, we wrote about a short documentary by The Atlantic entitled “The Cyborg Drummer”, which told the story of Jason Barnes, a talented multi-instrumental musician who lost his right hand in an accident. Since that time, Barnes has been working with Gil Weinberg and his team at the Center for Music Technology within Georgia Tech College of Design to create a prosthetic that would meet the speed needs of a drummer. In addition to the drumming hand, Weinberg’s team developed a bionic hand inspired by Star Wars, which Barnes tested out on a piano. In April 2018, Barnes and Weinberg launched a Kickstarter project to make improvements upon the drumming prosthetic such as its portability, and allow Barnes to get out of the lab and travel with it, something he can’t do now.

Georgia Tech’s new policy doesn’t allow Jason to travel and perform with it freely or benefit from it personally. The prototype also requires a couple of computers and a technical team to operate. With the new portable arm that we hope you would help us develop, Jason would finally be able to own his arm and become the traveling musician he has always wanted to be.

The two men spoke with IEEE Spectrum about their fundraising goals, specifically where the money will be spent.

Weinberg: We want to allow Jason to explore superhuman abilities (for example two sticks that can play at speeds of 40 hertz— four times faster than the fastest human drummer). The components that allow for such capabilities are expensive. Moreover, building a prototype requires research, experimentation, correcting mistakes, etc., which increases cost. …With the new self-contained and portable arm that we hope to build with the help of the Kickstarter campaign, we will be able to allow Jason to experience and present both low latency dexterous control and the “mind of its own” capabilities on stage.

Barnes: The arm can play at speeds not humanly possible, it can also play strange polyrhythms that no human can play. It would help boost my creativity and my ability to play. 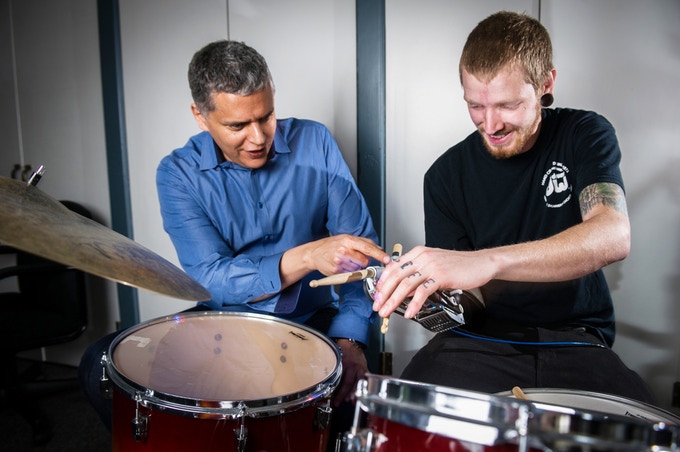