A stray tabby with an unusually colored coat of greenish-blue wanders the streets of Varna, Bulgaria, causing onlookers to do a double-take whenever the feline walks by. While there have been suspicions of nefarious intent, it turns out, per Olga OV (via Rex Features), that the cat regularly sleeps atop a pile of powered green paint in a local garage.

(translated)The appearance of a green cat on a street in the Bulgarian city of Varna, which is 450 kilometers east of the Bulgarian capital Sofia, has caused considerable surprise among local residents. First, people speculated about a strange mutation. Then joined animal advocates who suspect one or a group of residents in cruelty to that poor animal. On Facebook immediately appeared cat support group that was trying to find the perpetrators of the crime, which, they believed, abused animals and painted it in emerald green color. And then do the green cat experts from local veterinary clinics … The mystery was solved. To everyone’s surprise it turned out that the cat just loves to sleep in a pile of green paint powder in one of the garages in Varna.

While Olga refers briefly to a veterinarian in her statement, the hope is that the health of this kingfisher kitty will be monitored consistently. 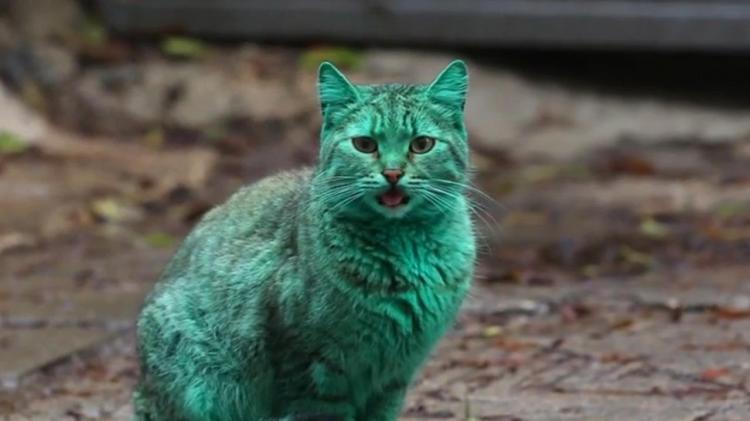