Trace Dominguez of DNews reports on a recent collaborative study conducted by PhD candidate Max Ortiz-Catalan and his teams at Chalmers University of Technology and Sahlgrenska University Hospital, both in Gothenburg, Sweden. The study essentially found that the use of virtual reality games involving the use of the missing limb via electrodes significantly reduced the phantom pain the subject was experiencing.

An increment in pain was reported by the patient after the first session, however, the pain decreased slightly below the original level in the second session, after which a slow yet consistent improvement was seen in the sustained level of pain. Figure 2 illustrates the progress in pain reduction. After 4 weeks, the patient reported starting to experience episodes of lower pain intensity. After 10 weeks, episodes of almost absent pain started occurring and this then developed into completely pain-free periods a couple of session later. This was reported by the patient as the most dramatic effect: “These pain-free periods are something almost new to me and it is an extremely pleasant sensation.” In addition, pain-free periods of 15–60 min were reported immediately after the rehabilitation sessions. 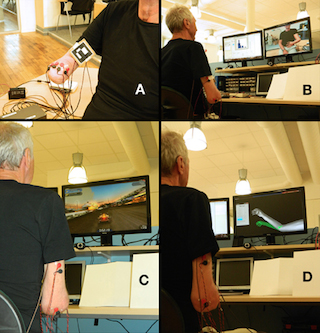 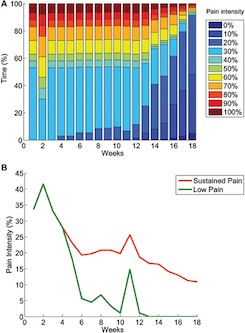 I can’t help but think about our friend Miles O’Brien as I write this post. Miles had his left arm amputated just above the elbow on February 14, 2014 due to acute compartment syndrome while on a reporting trip in the Philippines. His strength throughout this entire situation has been absolutely awe-inspiring and the candidness in which he tells the story of his amputation is just incredible. He is a consummate professional and an amazing man.