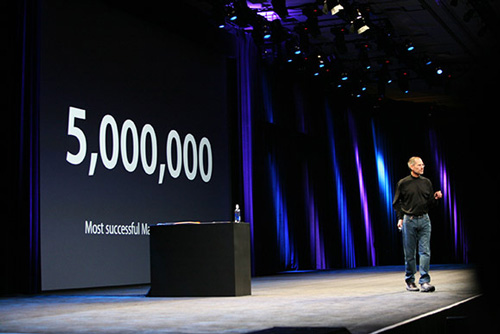 Today is the big day for the Apple universe. All eyes are on Moscone Center in San Francisco for the Stevenote, Steve Jobs annual Macworld 2008 Keynote.

By far the best live coverage each year comes from Ryan Block and his awesome crew at Engadget: Live from Macworld 2008: Steve Jobs keynote (refresh)

Justine Ezarik is attempting to live stream the keynote.

Of course Fake Steve Jobs will be live blogging his fake keynote as well as posting to Twitter.

Major announcements from the keynote:

– iTunes Movie Rentals, all major studios on board

UPDATE 1: Macword 2008 coverage is crashing servers left and right. Twitter went down within the first 10 minutes.

UPDATE 2: This year’s keynote did not include Jobs’ normal “One more thing” at the end.

UPDATE 3: Apple has posted their video of the Macworld 2008 keynote.

UPDATE 4: If you don’t have time to watch the full 90 minute keynote, Mahalo Daily has just the solution, The Steve Jobs 90 Minute Keynote (in 60 Seconds).