Macworld 2008 takes place next week, Monday, January 14th though Friday, January 18th at the Moscone Center in San Francisco. The Expo opens on Tuesday after the keynote. I’ll be stopping by throughout the week, so maybe I’ll see you there. 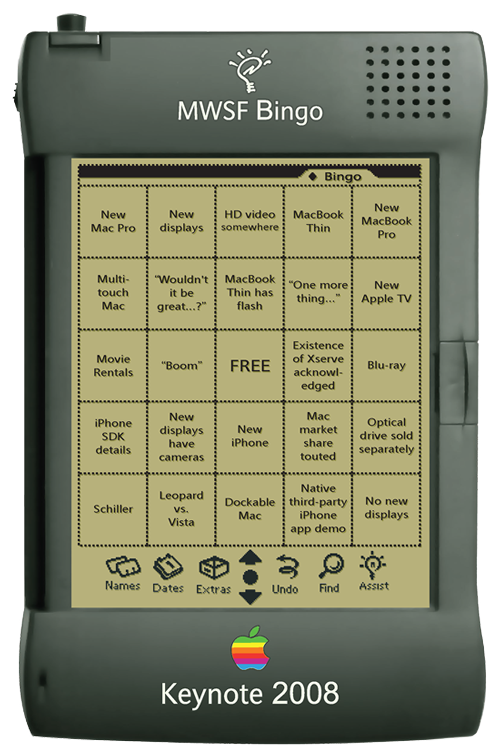 Of course the big show, Steve Jobs’ annual keynote, takes place Tuesday morning at 9am. Ars Technica’s John Siracusa has released his annual MWSF 2008 Keynote Bingo Card so you can play along as Jobs engages his Reality Distortion Field.

Also, Insanely Great Tees and The Bureau of Communication are having their Macworld Keynote 2008 Predictions contest.

If you can’t attend the keynote in person, make sure to tune into excellent live coverage of the keynote provided by Ryan Block and his awesome crew at Engadget.

The biggest rumor this year is the possibility of a new ultra-thin MacBook. Here are a few Macworld 2008 rumor roundups:

Oh and what would Macworld be without an non-stop schedule of events and parties. Here’s a list of some interesting events taking place next week during Macworld 2008:

UPDATE: Here are my photos from the Macworld 2008 Expo floor.