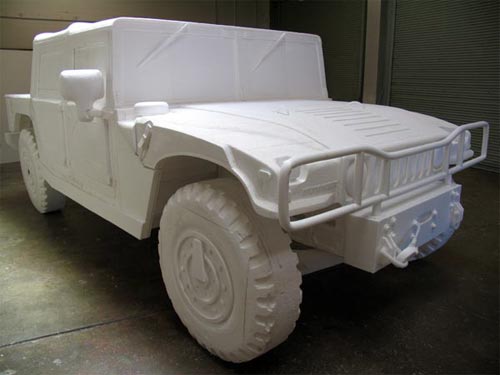 “Reconsidered Materials”, an exhibit focusing on the use of unusual materials to create art, opens at the Exploratorium in San Francisco on February 3rd. The opening night will also feature live performances, films and one-night installations. The exhibit will be on display through June 18th, 2006.

Reconsidered Materials or Although Suitcases May Seem As Though Theyâ€™re Made of Stone, They Seldom Are is a special exhibition of over ten artworks on view from February 3-June 18, 2006 at the Exploratorium. It draws attention to the invisible interaction between object and substance by creating works from unusual or unexpected materials. On the night of February 3, the whole museum will be filled with performances, films, and additional one-night-only artworks that further comment on the subtler and more abstract relationships objects have with the materials of which theyâ€™re made. On February 3 only, don’t miss Liz Hickok’s San Francisco in Jell-O, replete with dry-ice fog, or Mauricio Ancalmo’s sound and light installations, dialogs between film projectors, sewing machines and word processors. The special opening-night event, which is co-sponsored by Campari and features an additional ten “performances,” takes place from 7-9pm, and is included in the price of admission ($13) to the museum.

UPDATE: Marc has just informed me that that amazing Wet Gate will be performing at the opening.