Mat Taylor of the gadget video channel Techmoan (previously) decided that he wanted to find out what a chocolate record would sound like when played. While browsing Etsy, Taylor found the shop for Prudence Strait of Food Is Art, a chocolatier in Tewkesbury, England who makes chocolate records. Each record features the Tewkesbury Town Band playing either a Christmas or birthday song. Taylor ordered it and attempted to play it on an older but traditional turntable. As it turned out, the tonearm was too heavy and unfortunately carved a new path into the chocolate, rendering it unusable.

So I put my chocolate record on this record player, and this is what happened. Whoops. Yeah. So that was a bit of a shame, but it’s entirely my fault. I was just using the wrong kind of record player. It’s just too much downward force. So rather than following the groove, that’s in the chocolate, it just drew its own spiral into it after all is quite soft, but that means it’s now unplayable on anything… 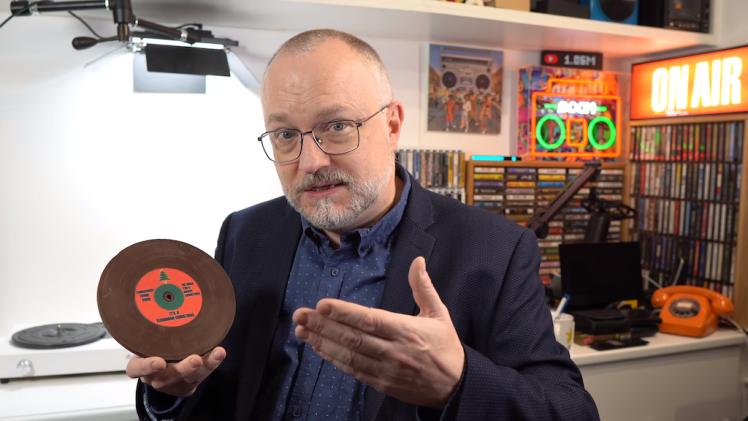 He then gave it a second go with a new record and an upright turntable. The turntable squeaked out a noisy but discernible version of “We Wish You a Merry Christmas”.

So here we go, fingers crossed. I’ve got my volume turned up. Yeah, I think I’m going to need to clean that stylus off, but, wow that worked didn’t it? I’m sure you could hear that quite clearly as I could. It didn’t sound too dissimilar to some old cylinders that I’ve got. Really quite impressed how the stylus was able to follow the groove on the disc as well.

Here’s a shorter version that goes right to the record playing.