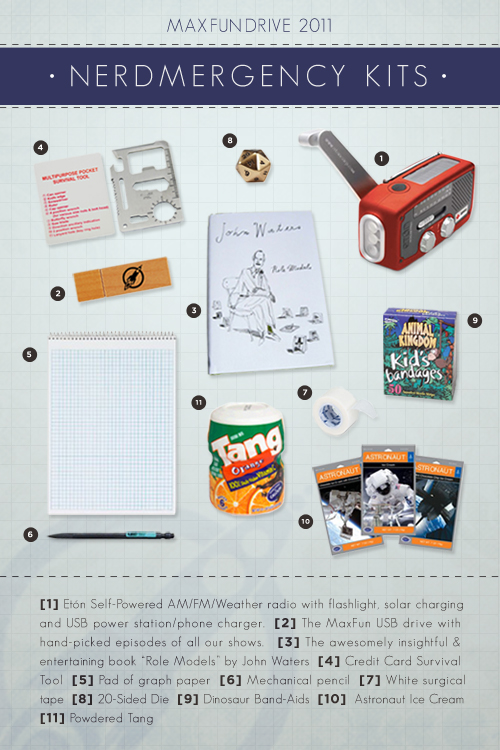 Our friend Jesse Thorn and the team over at MaximumFun.org are in the midst of their annual MaxFunDrive. Even though The Sound of Young America, Jesse’s long-running interview show, is heard on public radio all over the country their fundraiser is not the standard air-break-guilt-trip-athon, as may be obvious from the Nerdmergency Kit, one of their donation thank-you gifts.

An unapologetic comedy nerd in every sense, some of Jesse’s recent TSOYA interviews have included Scott Thompson (of Kids in the Hall), Weird Al Yankovic, and Dick Cavett. From humble beginnings at KZSC, the UC-Santa Cruz college radio station, the show now airs on 25+ radio stations and is one of the top comedy podcasts in the iTunes Store.

Jesse has built on that success, starting a whole fleet of seriously funny podcasts under the awning of MaximumFun.org including co-hosting a second comedy show with long-time pal Jordan Morris called Jordan, Jesse Go!, plus the shows Judge John Hodgman (starring real news fake expert & PC, John Hodgman), Stop Podcasting Yourself, and, added in January, My Brother, My Brother and Me.

And since that’s not enough, MaximumFun also host podcasts of San Francisco comedy icons old (Coyle and Sharpe) and new (Kasper Hauser), produces the annual convocation of awesomeness MaxFunCon, which you’ve heard about here before, and there’s even a Jordan, Jesse, Go! online game.

The MaxFunDrive caps off with a special live broadcast of Jordan, Jesse Go! with special guests on Sunday, March 13th at 7pm Pacific.

Oh and Jesse is also one of the artists along with Chicken John in the upcoming “Let It End Like This” art show in NYC.