An incredibly agile humanoid robot named CUE 4 sunk two perfect basketball shots during the halftime of the USA vs. France basketball game at the 2020 Summer Olympics in Tokyo. Of course, the joke of the evening turned to Ben Simmons, the Australian basketball player who seemingly ghosted the Philadelphia 76ers.

CUE4 is actually an artificially intelligent robot that was built by employees of the Frontier Research department of Toyota Central R&D Labs in their spare time. While none of these employees had experience in either robot development or artificial intelligence, CUE4 is an amazing body of work that plays on the of Alvark Tokyo basketball team. 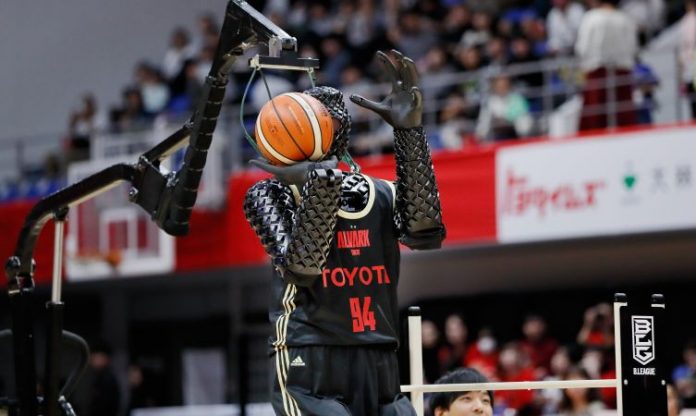 A previous iteration of this basketball-playing robot (CUE 3) set the Guinness World Record for the most consecutive free throws by a humanoid in 2019.

Toyota Motor Corporation’s robot – CUE3, who is a member of a Japanese basketball team Alvark Tokyo, is a robot that can use its sensors to know where the basket goal is and adjust its motors inside to make the perfectly calculated free throw. The robot threw for 6.5 hours straight.

While there have been previous generations of athletic robots built by Toyota, Cue4 is the most nimble and accurate.

A key difference with the new CUE 4 is that the robot is now able to ‘run’ from one position to the next. The video below shows CUE 4 amazing spectators with its shooting accuracy around the three-point line at a recent all-star competition.