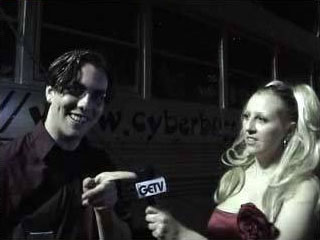 Webzine co-founder Eddie Codel and independent journalist Irina Slutsky have recently joined forces to launch the new video blog Geek Entertainment TV (GETV), where they report on Web 2.0 from “deep inside the bubble”. They now have 7 snark infested episodes in the can. In their latest installment, Irina interviews globetrotting photographer Jacob Appelbaum at the Laughing Squid 10th Anniversary Party about his upcoming trip to Roboexotica in Vienna which took place last week.

Geek Entertainment TV is an emerging global media empire, reporting from deep inside the bubble as it re-inflates. GETV covers buzzword compliant topics such as web 2.0, tagging, AJAX, social software and the bubble juice known as VCs. We like robots, so you’ll hear about that too.