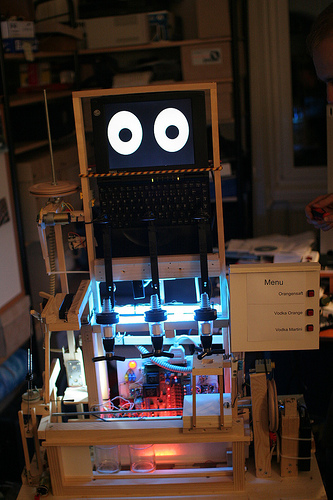 Roboexotica takes place this week (November 16th through 20th) at the Freiraum in the MuseumsQuartier of Vienna. Produced by our friends at monochrom, along with SHIFZ and Bureau of Philosophy, Roboexotica is a festival of cocktail-robots, that is robots who’s sole purpose is to create cocktails for human consumption and enjoyment.

Roboexotica is the first and, inevitably, leading festival concerned with cocktail robotics. Until recently, no attempts were made to publically discuss the role of cocktail robotics as an index for the integration of technological innovations into the human Lebensraum, or to document the increasing occurrence of radical hedonism in man-machine communication. Roboexotica is an attempt to fill this vacuum. A micro mechanical change of paradigm in the age of borderless capital. Mr. Turing would without a doubt test this out. Scientists, researchers, computer geeks and artists from all over the world participate to build cocktail robots and discuss about technological innovation, futurology and science fiction.

Several representatives from San Francisco will be participating in Roboexotica, including Kal Spelletich, David Calkins (RoboGames, ComBots) and Jacob Appelbaum, who will be shooting photos of the event.