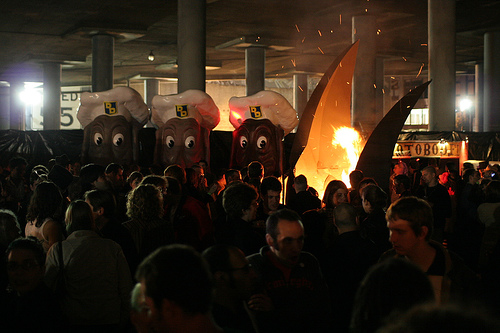 Thanks to everyone who came out to our big 10th Anniversary Party on Saturday. The event was a huge success, a wonderful carnival of freaks and geeks, and I couldn’t image a better way celebrate a decade of Laughing Squid.

The always amazing Jacob Appelbaum shot a bunch of great photos. Brian Walsh was on the scene and captured all the action quite nicely as well. Here’s all the Flickr photos from people who were at the party (see below for a list of all the individual photosets). Oh yeah, and Eddie Codel shot a funny short video outside at the party.

This event would have not been possible without all of the great people who helped make it happen. I would like the personally thank everyone who was a part of this party, including:

– Our fabulous Master of Ceremonies Kitten on the Keys.

– Our outside artists the Flaming Lotus Girls, with their incredible centerpiece, the head of the “Angel of the Apocalypse”, Kal Spelletich of SEEMEN (with help from Big Daddy) running a stunning array of interactive kinetic art, Robert Burke and crew with their bizarre Cross-Culture Goose Gyro, Wrybread’s awesome Photoboof, Cyclecide’s pedal-powered carnival ride The Dizzy Toy, Kevin Gauna with his beautiful Sunbrothers solar-powered rose sculpture, The Popcorn Guys with their delicious kettle corn, Grant Irish’s attention grabbing Burning Mandible, Sam Stoller’s excellent video projections and of course The Holy Trinity of the Dogminican Order, who keep watch over us throughout the evening.

– All the art cars that showed up, including Vain Van (Emily & Ken Duffy), Drala Dragon Wagon (Bruman Bjerke & Joy Jonston), Von Tiki (Jake Goldstein), Grooovalicous Princess of Peace (Avril Hughes) and Cyberbuss. A special thanks to Philo Northrup for putting the call out to the art car community.

And a very special thanks to Kerri and Jen of Varnish Fine Arts for being such awesome hosts and to Zeus and his top-notch security crew. 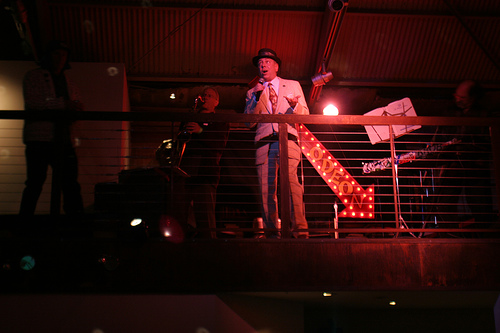 – Tech Alley (inside & outside) The Board of Supervisors of the City and County of San Francisco issued a Certificate of Honor for Laughing Squid. The certificate reads as follows:

In recognition of Laughing Squid for promoting underground culture, providing an online home to the City’s most weird and profitless and for bridging the culture-geek divide. The Board of Supervisors of the City and County of San Francisco extends its highest commendation.

Many thanks to Eddie Codel for setting this up.

UPDATE 1: The photos from the Photoboof are now online.

UPDATE 2: The San Francisco Chronicle has published an article on the party in their November 20th, Sunday paper.

UPDATE 3: Enric Teller posted some great videos from the party.