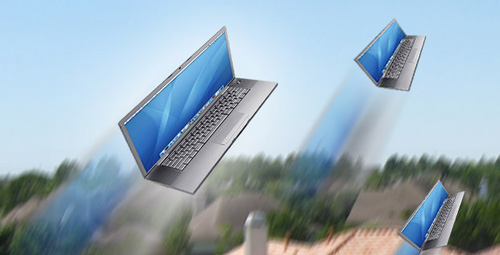 If you’ve been following the latest Macworld 2008 news you probably heard about the signs that have been hung at the Moscone Center that say “There’s Something In The Air”. There is much speculation as to what that might mean, but according to Brighton based “internet junkie” Aral Balkan, that something is a flying MacBook Pro.

It all makes sense. We’ve all been expecting the MacBook Pro line to get a radical overhaul this year. While Apple was busy spreading misinformation about an ultra-slim notebook they were secretly putting the finishing touches on the new MacBook Pro’s dilithium crystal-powered nano warp drives. Insiders close to Apple have revealed that although the new notebooks are theoretically capable of Warp 9 speed, Apple will be artificially clamping speeds at Warp 1 for the initial run. We have, however, learned that Philip Torrone and his elite Make ninjas are close to perfecting a trans-dimensional time machine which they plan to use to go back in time, hack the new MacBook Pros before release to remove the restriction and create the world’s first pre-hacked product release in the process (good luck guys!)