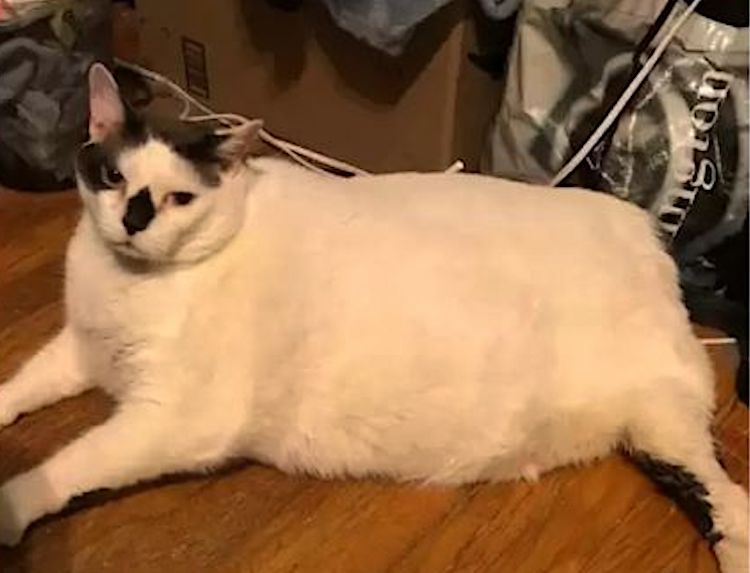 On April 5, 2019, an extremely overweight cat named Barsik was surrendered to the Animal Care Center of New York with his feline sister Sukie when their humans were unable to take the cats with them when they moved. According to the ACC, Barsik is the biggest cat ever to be brought to them. Luckily, both cats found a foster home with a kindhearted and experienced woman named Angelique Iuzzolino who works with the no-kill adoption center Anjellicle Cats Rescue. Barsik’s foster mom has promised to help get this cat closer to a healthy weight before finding him a permanent home.

My family left me and my housemate, Sukie, because they were moving and couldn’t take us with. My foster mom is a volunteer with Angelliclecats in Manhattan and saw these two pictures of me on Facebook and decided she was up for the challenge of helping me get in better shape before finding me a home of my very own.

Once Barsik is released for adoption, his new humans will have to keep up his weight loss regimen until he gets down to his ideal range. Additionally, while Barsik and Sukie came in together, they don’t necessarily have to be adopted together.

Don’t worry, Sukie is crashing at the foster pad as well! According to my intake info from my last owners, we might not actually like each other, though.

We had previously written about Bruno, an overweight big-bellied 25-pound cat who sat up on his hind legs, but Barsik at 41 pounds, is 16 pounds heavier and his weight loss must be monitored closely. Barsik’s experienced foster mom explained on why putting an obese cat on a diet can be complicated if not done correctly.

Fat cats are adorable and people love them, but it is so dangerous for them to be obese. Unfortunately, it is also dangerous for cats to lose weight too quickly and I think that’s what most people don’t quite understand. …The liver has many functions, including helping food digestion and handling excess insulin. Part of the liver’s job is to produce energy for the body in times of starvation; first tapping into stored glycogen, and then reaching out for body fat to convert to energy. Cats are supposed to be active hunters with little excess body fat and their livers are not accustomed to processing large amounts of fat. If their food is drastically decreased or they stop eating, the liver taps into fat stores for energy. This can lead to hepatic lipidosis – if the liver gets overloaded, the fat accumulates there, causing decreased liver function or even failure. …This is where the danger lies with obese cats – the more body fat available, the more at-risk they are of developing hepatic lipidosis if they aren’t eating enough. THIS is the reason we have to find out his current health status and work with our vet to determine the mid-point of calories between not getting enough (preventing this condition) and still in a deficit to lose weight. There is a lot of knowledge out there for how to feed a slightly overweight cat, but Barsik is in his own category and we can’t just guess and see what happens. ANY weight loss plan for a cat has to be slow, steady, and controlled.