Back in 2014, Dan of Allotment Diary pulled his very first show carrot from a greenhouse dirt barrel after seeing a hopeful crack in the dirt. The root vegetable was a bit stubborn and removal took a bit of effort, which Dan gladly provided. In the end, it was worth it, as the carrot stood nearly as tall as the barrel in which it had grown.

Decided to pull the first Giant Exhibition Show Carrot this evening as I discovered a small crack at the top and wondered how big it would be. The answer…absolutely enormous and if the rest are as big hopefully I should have some good ones to show later.

More recently in 2018, when Dan went to retrieve his show carrots he found that the year’s crop was not as cooperative as in 2014. That said, Dan did pull some interesting ones, including a multi-legged ‘octopus carrot’. 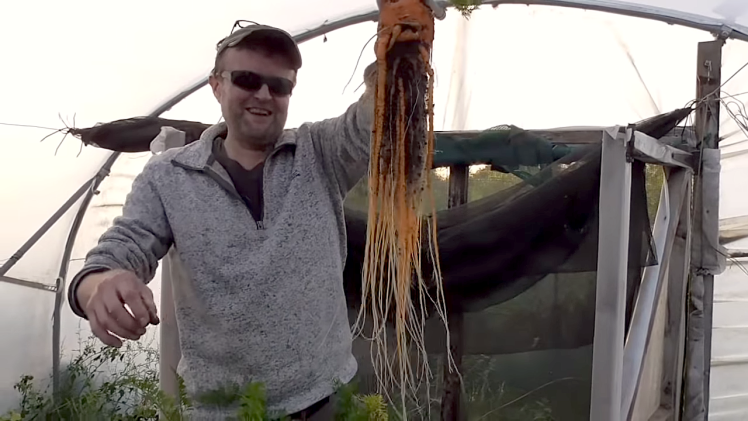 …but what we dug up is an octopus carrot. Now that is going in the strangest veg class tomorrow. …check that out that’s something else. Look at that, it’s got 20 legs. Oh dear.

Dan had much better luck in 2018 with his giant marrow zucchinis and his giant onions, which were both amongst the largest he’d ever grown.