In this lovely video posted by Elephant News, a gorgeous female elephant named Faa Mai quickly falls asleep to a sweet lullaby sung by her caretaker Lek after a long day of playing nanny to two boisterous calves at the Elephant Nature Park at Chiang Mai, Thailand. 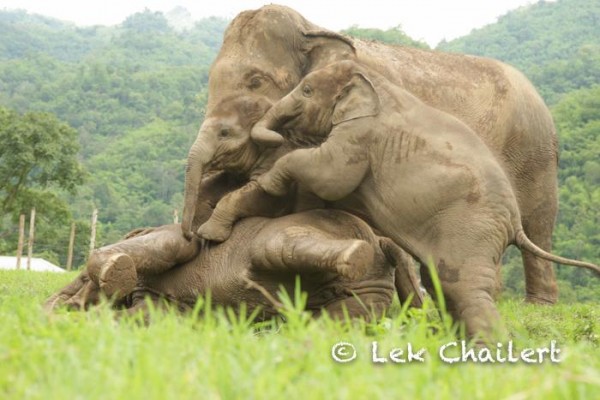 Faa Mai and the other elephants at Elephant Nature Park are the subject of Gentle Giants, a full-length documentary that tells the story of an 11-year old who volunteers at the park and what he learns about these magnificent creatures.

Gentle Giants is a compelling 45 minute documentary about the tragic and sad lives that all too many captive Asian elephants have to endure. Join our young friend, 11 year old Zacchari, ‘Tonnam’ Bellas, as he acquires a great education while volunteering at the Elephant Nature Park in northern Thailand and at the elephant village of Ban Ta Klang in Surin. He soon discovers that everything is not as it first appears to the tourists that come to watch the elephant shows and ride these gentle giants