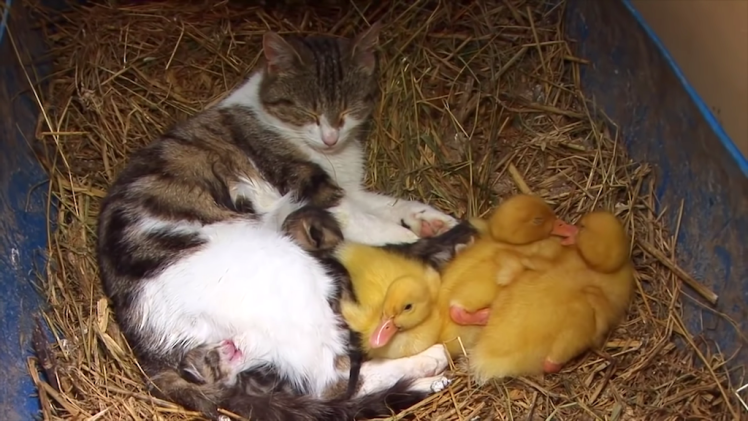 In a touching episode of the series Real Wild, host Liz Bonnin (previously) visited with Ronan and Emma Lally on their small farm in Ireland. The Lally’s shared the amazing story about their cat Della, who adopted a trio of ducklings right after they hatched. When the ducklings went missing, the couple feared the worst. As it turns out, however, Della had just given birth to her own kittens, so when she came across these motherless ducklings, she felt a need to step in and claim them as her own. The ducklings were more than happy to adopt Della as well.

something very unique you know duck moms don’t produce milk and ducklings are born ready to find their own food and water from their surroundings, so to see them suckling a cat is extraordinary. Experts can only guess that their natural foraging instinct calls them to come upon the milk as an unexpected food source and their desire for warmth and comfort kept them close to their foster mother.

Since ducklings grow far faster than kittens, they seek out their independence earlier. That said, they still have a warm place in their fuzzy little hearts for their foster mom.

Several weeks later the kittens are still small and the ducks, although independent, still have an attachment to their surrogate mum.

via The Kid Should See This