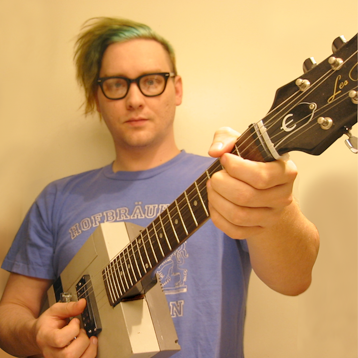 I dare you to listen to Xoc’s newest album without smiling. If the retro game nostalgia doesn’t get you, the quirky melodies and funky instrumentation surely will. The Beginning of the End, the album’s title track, is an 18 minute long medley featuring over 100 classic video games songs. That’s right, 100 songs from over 80 games, in under 20 minutes. The album also includes each song in the medley as its own mp3 track. Put it on shuffle and play “Name that Game” during a lull at your next party.

You may remember Xoc’s NESpaul, a guitar built from an original Nintendo Entertainment System, or maybe you’ve heard his live recordings of the entire soundtrack to Super Mario Brothers 3, but The Beginning of the End is his most ambitious project yet. 4 years in the making, TBOTE uses a wide variety of instruments, including theremin, toy piano, Casio Sk-1, guitars, and drums. It’s a slick mix of adolescent memories and lo-fi pop. Think Metriod meets Neutral Milk Hotel.