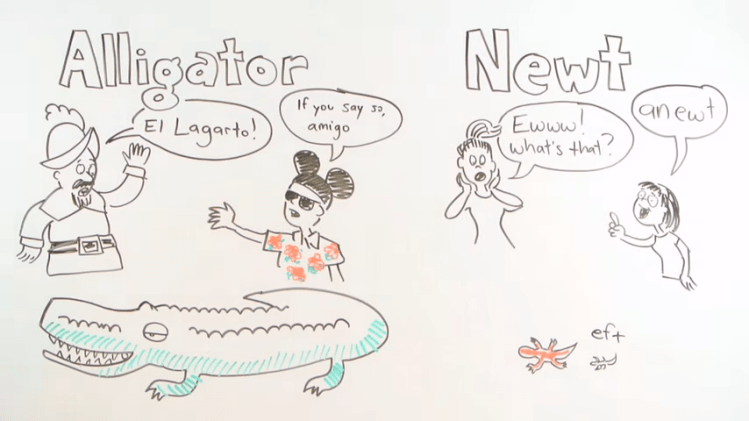 Linguist Arika Okrent and illustrator Sean O’Neill verbally and visually explain how certain words in English started out in other forms that were often misheard and eventually adopted as correct in the latest episode of their incredibly informative whiteboard series for Mental Floss.

The n of English an, has also caused mistakes. Apron originally came into English as”napron.” But “a napron” was misheard often enough as “an apron” that we dropped that first n from the word altogether. Umpire lost its n from the same sort of confusion. It came to English from the Middle French “nonper,” meaning “without peer; peerless” A nompere–or was it an ompere?–was an impartial judge or referee. Eventually the n-less form won out. The confusion about which word the ‘n’ belonged to could end up swinging the other way too. “A nickname” started out as “an ekename,” meaning an added name. The n traveled over from the “an” to stick to “nickname.” This n-sticking also happened to newt. A newt was originally an “ewt,” but “an ewt” could easily be misheard as “a newt.”