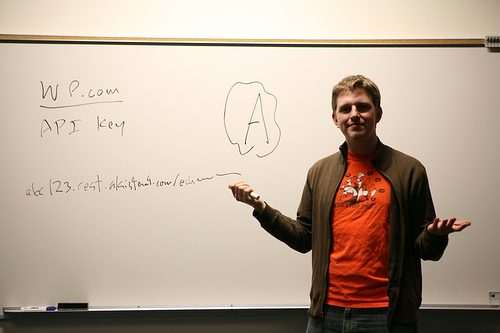 Just a reminder that WordCamp, an all day long WordPress conference (the first of its kind), takes place this Saturday, August 5th at the Swedish American Hall in San Francisco. All of the people who work for Automattic (WordPress’ parent company) will be in San Francisco for the first time ever, along with a bunch of WordPress developers and bloggers. Here are some of the session ideas that have been proposed so far.

In addition to being one of the sponsors of WordCamp, all of Laughing Squid Web Hosting will be in town as well, including our Support Ninja Jason Laskodi and our Chief Tentacled Officer, Barry Abrahamson, who is also WordPress’ system administrator (Happy belated Sys Admin Day Barry!). Rumor has it that Laughing Squid will be working out of Ritual Coffee Roasters on Friday (that is if we can get a table). So as you can tell, the relationship between Laughing Squid and WordPress is very close, which is why we are so exicted about this Saturday’s WordCamp.

Speaking of WordPress news, version 2.0.4 was just released and Automattic also just hired rockstar designer Bryan Veloso, who has worked as a designer on Facebook and Flock.