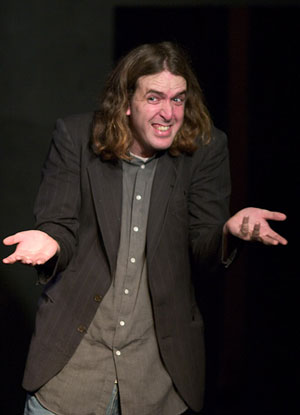 San Francisco’s own underground comedy mastermind Will Franken has been invited to perform at FringeNYC, The New York International Fringe Festival. He will be performing his solo show “Good Luck With It” at Collective: Cabaret. If you live in New York or have friends who do, please spread the word about this rare opportunity to see Will perform on the East Coast.

Will Franken pioneers a completely fresh solo show format with Good Luck With It, a darkly satiric, brazenly absurd performance that takes “everyday contradictions to their logical conclusions,” in the words of the Oakland Tribune. Transcending the autobiographical style of traditional solo shows, Franken takes audiences on a delightfully surreal romp through his twisted subconscious. A man has a surreal encounter with a talking file cabinet whose conversational style resembles that of HAL in 2001: A Space Odyssey. A Bay Area activist protests Bush’s evil and exploitive war against the 18th Century: “No blood for powdered wigs!” A public service announcer delivers a strangely logical message: “Every 60 seconds in America, a minute goes by. For every one minute, there are 59 others just waiting to form an hour. By the time this sentence is over, I will have finished saying it. Is prevention possible? What about our children? Can children be prevented?”