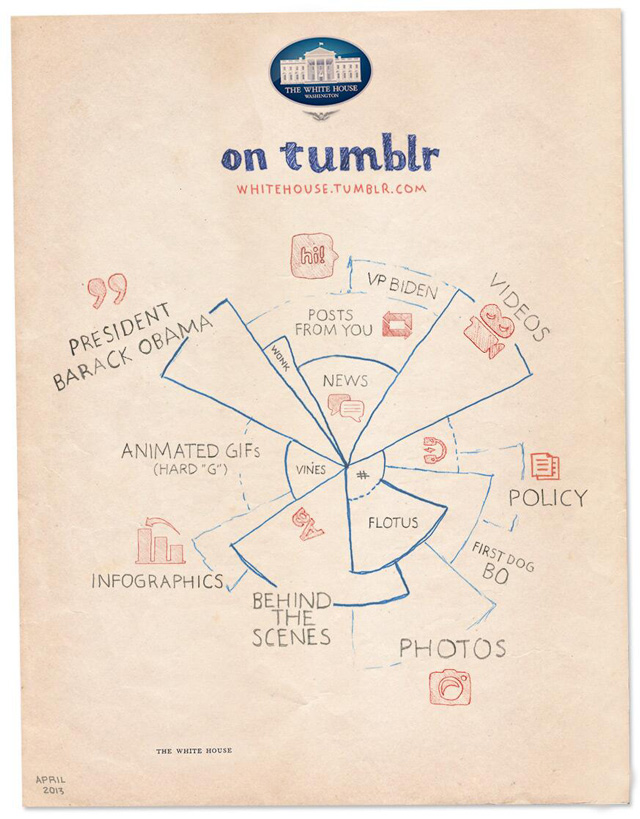 On their Twitter feed, The White House has just announced their new Tumblr blog, Whitehouse.Tumblr.com, which they promise will have GIFs.

We see some great things here at the White House every day, and sharing that stuff with you is one of the best parts of our jobs. That’s why we’re launching a Tumblr. We’ll post things like the best quotes from President Obama, or video of young scientists visiting the White House for the science fair, or photos of adorable moments with Bo. We’ve got some wonky charts, too. Because to us, those are actually kind of exciting.

But this is also about you. President Obama is committed to making this the most open and accessible administration in history, and our Tumblr is no exception.

We want to see what you have to share: Questions you have for the White House, stories of what a policy like immigration reform means to you, or ways we can improve our Tumbling. We’re new here, and we’re all ears.

So give us a follow, send a post our way using the submission tool, and stick around to see some things you won’t want to miss.

And yes, of course there will be GIFs.

Breaking: The White House is now on @tumblr (and there will be GIFs). at.wh.gov/ksJHi, twitter.com/whitehouse/sta…