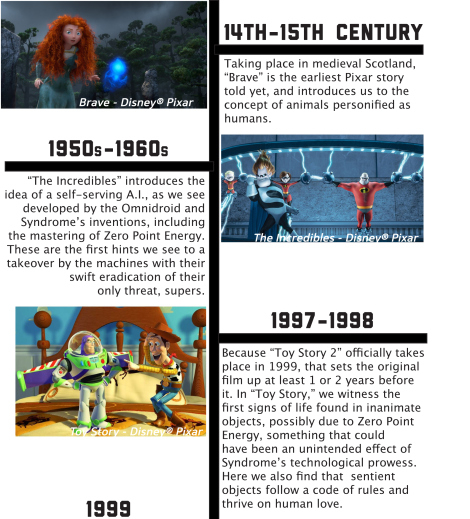 Jon Negroni has created The Pixar Theory, a theory that every animated Pixar film takes place in the same universe and is all part of the same timeline in which intelligent animals, sentient machines, and humans coexist. The idea was inspired by a Cracked video about the apocalyptic themes in Pixar films, and Negroni fleshed out the idea by organizing all of the films into a timeline and explaining how they’re all connected. According to Negroni’s theory, Brave comes first in the Pixar universe and helps explain how animals developed intelligence, and Monsters Inc. is the last in the timeline and is the result of the cross-breeding of humans and animals following the first apocalypse that took place before the events of Wall-E. To read up on the full theory, head over to Negroni’s website.