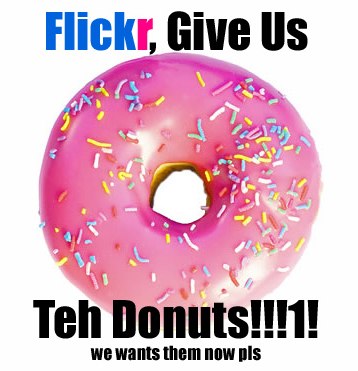 UPDATE: Matthew Rothenberg, who works for Flickr, confirms that they will in fact be providing donuts. At long last the people are getting what they demanded.

While you have not yet reached your goal of 20K members, we at FlickrHQ have heard of your noble efforts and seek to answer your cries for justice.

Save the date: Wednesday, April 16th, 11:00am at a donut shoppe TBD in downtown San Francisco. I will purchase one (1) free donut for every We Demand Donuts group member who shows up.* (*While supplies last.)

This is not a joke.

(I sincerely apologize for those members who are not local to the SF Bay Area, but the combination of a greasy donut and a postal envelope is a very sad thing indeed, and would be an affront to Donutkind.)