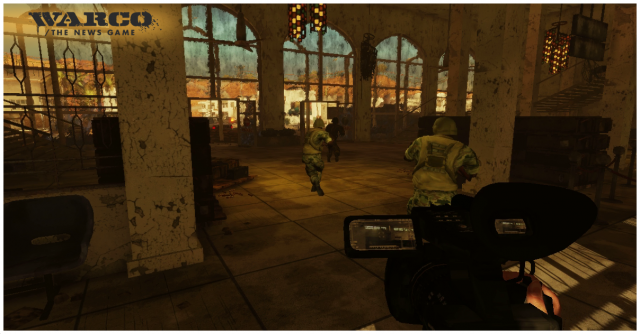 Warco is a first person shooter game with a rather unusual twist–rather than a gun, the player wields a camera as a war correspondent (aka “warco”). The player will be tasked with documenting trouble spots around the world and editing the footage into news reels. The game is a collaboration between Australian game company Defiant Development, filmmaker Robert Connolly and journalist Tony Maniaty. The game is currently in development with no set release date.

Record dramatic images of war, save them in-game, then edit the results into a compelling frontline TV news story. Beam the results to global audiences on the web. No two WARCO stories will ever be alike. It’s an edge-of-seat gaming experience – and a powerful entry-level training tool for future combat reporters. WARCO is perfectly timed to take advantage of the convergence of games and movies, journalism and online communities, in a world undergoing massive social, geo-political and technological change.