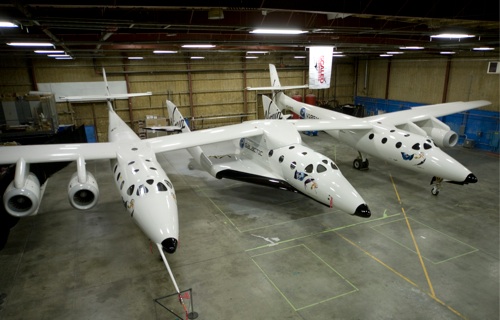 Virgin Galactic has unveiled SpaceShipTwo (SS2) and its mothership VMS Eve (WhiteKnightTwo), the world’s first commercial manned spaceship, which will provide space tourism flights from Spaceport America in New Mexico. The rides will each cost $200K and last for 2 1/2 hours, which includes five minutes of weightlessness.

Virgin Founder, Sir Richard Branson and SpaceshipOne (SS1) designer, Burt Rutan, today reveal SS2 to the public for the first time since construction of the world’s first manned commercial spaceship began in 2007. SS2 has been designed to take many thousands of private astronauts into space after test programming and all required U.S. government licensing has been completed.