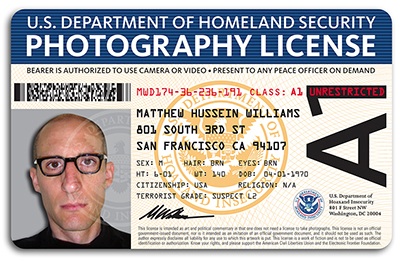 Matthew Williams, who is a deity of subversive design, has created two beautiful MUNI and DHS photography licenses to confound cops and security guards that (incorrectly) believe taking photos in public places is a crime.

These unofficial (not fake or fraudulent, mind you) licenses were inspired when our guest blogger Troy Holden was stopped by a MUNI fare-inspector who demanded that Troy not take any photos and insisted that he needed permission and credentials to take photos. MUNI has since apologized.