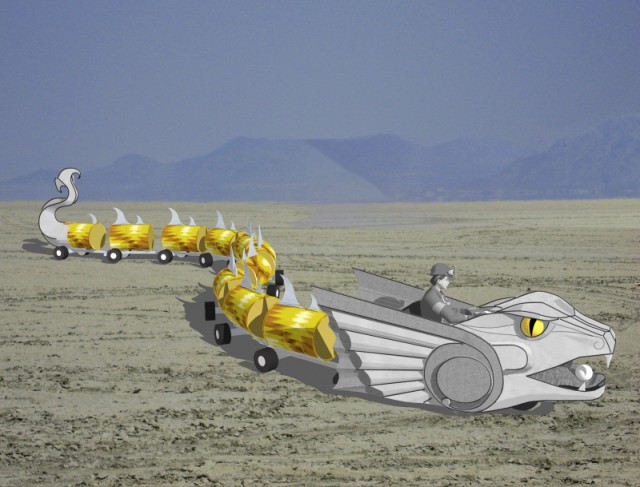 Artists Jon Sarriugarte and Kyrsten Mate of Form & Reform, makers of the wonderful Golden Mean snail car, are building two giant kinetic sculptures, the Serpent Twins, for Burning Man 2011. Inspired by Norse mythology, the fifty foot snakes will be able to move about the playa and shoot jets of fire. The artists are raising funds for the project on Kickstarter.

These twin sculptures are the embodiment of the Serpent mythology that exists in numerous cultures throughout the world. The first is Jormungand, a dark harbinger of doom that Thor fights to save the human race in Nordic myths. His body comprised of blackened steel, he shoots fire from his mouth to prove his dominance over mortals. His twin, the bright Julunggul, shines in the sun and lights the night from within its 50′ body. She serves man by swallowing boys and spitting them out as men. They should both be fantastical in the old fashioned sense of the word!