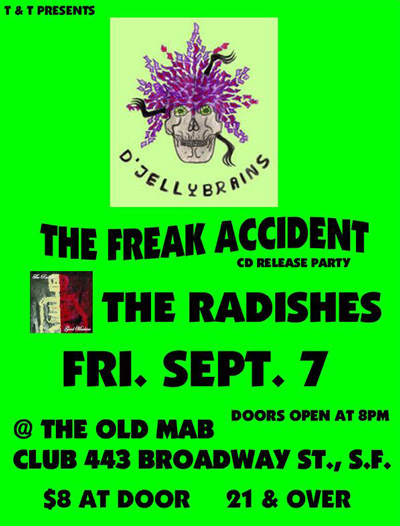 The beloved San Francisco music venue The Mabuhay Gardens (aka The Mab or The Fab Mab) is re-opening this Friday, September 7th. Legendary promoter Dirk Dirksen booked the club with punk and new wave acts beginning in 1976 until it closed in 1986. KUSF Rampage Radio hosts Tambre Bryant and Tonus Atkins are now re-opening the club, which they are calling The Old Mab, booking it with punk, metal and rock bands, including some that played at the original Mab. They kicking things off with this Friday’s re-opening show featuring D’Jelly Brains, The Freak Accident and The Radishes.

Originally a Filipino restaurant and club owned by Ness Aquino, it featured many Filipino celebrities. In 1976, Aquino agreed to have rock promoter and television producer Dirk Dirksen book punk and new wave bands there; it soon became one of the main venues for punk rock in San Francisco in the late 1970s and early 1980s (a sort of west coast CBGBs). Dirk dubbed the the Mabuhay Gardens “The Fab Mab”.

In 1983 Ness gave metal promoter Tambre Bryant a chance to bring metal into the Mab, it soon became one of the main venues for metal bands.

Virtually every early Bay Area punk, new wave, metal and rock band performed there at one time or another, and it was an important touring stop for bands from beyond the San Francisco Bay Area. Among the bands that performed there were the Dead Kennedys, Flipper, Romeo Void, Black Flag, The Dictators, The Nuns, The Offs, The Mutants, The Avengers, The Damned, DEVO, Iggy Pop, The Ramones, D.O.A., BLODIE, The Screamers, Minutemen, DRI, Redd Kross, JFA, Blind Illusion, Anvil Chorus, Megadeth, Metallica, EXODUS, Death Angel, Ulysses Siren, and WARNINGSF just to name a few. Comedian Whoopie Goldberg also made early appearances at the venue.