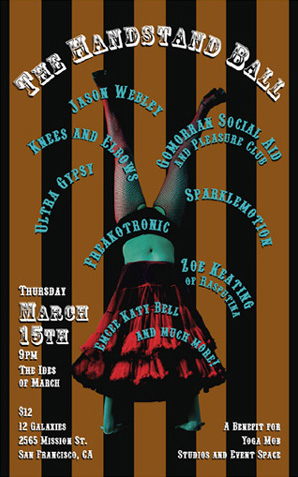 The Handstand Ball
A benefit for the Yoga Mob

In 2005, Katy Bell and Cat Levy, under the name Yoga Mob, began to offer donation based yoga and meditation classes out of various Mission venues â€“ warehouses, galleries, community centers, and clubs. In 2007, we are raising funds to open a studio dedicated to affordable yoga, events and beyond.

Friends, old and new from near and far, are gathering together at 12 Galaxies on March 15th to offer you a phenomenal night of music and spectacle. Jason Webley returns from his Eastern-European tour to dazzle us with new tales and new tunes. Zoe Keating, punk rock cello superstar, flies in from Portland to start the night off classy at 9:30 pm.