On March 2, 2018, Weird Al Yankovic released “The Hamilton Polka”, a wonderful cover of the Hamilton soundtrack that was remixed with a fabulous polka beat. Later that day, the show’s originator Lin-Manuel Miranda and Tonight Show host Jimmy Fallon simultaneously shared their respective favorable reactions to this remix as a the web exclusive. During that that night’s show, Weird Al joined Li-Manuel and Fallon onstage to perform a hilariously impassioned, high energy lip sync of “The Hamilton Polka”.

It’s a Weird @AlYankovic masterpiece. He added everything in his arsenal to that polka. Harmonies, rapping, duck quacks, slide whistle, Spike Jones spittoon sounds, jazz snaps all with the brilliant words and music from @Lin_Manuel.

It is phenomenal. Should we lip sync it tonight on our show? Yes. The answer is yes. #FallonTonight https://t.co/WiaSAeUecu

After the lip-synch performance, the three men sat down talked about how the project came about. 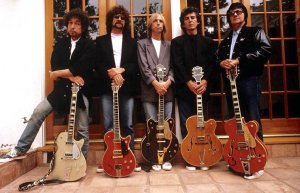