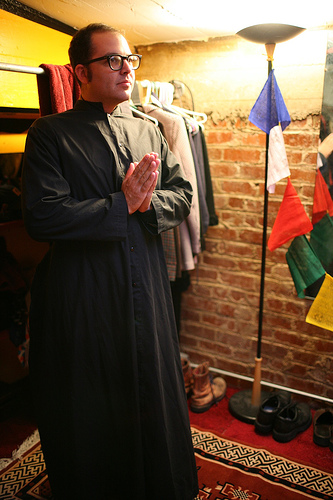 Legendary raconteur and showman Chicken John recently returned from his travels throughout western Asia. Last night he had a few friends over to his warehouse to show us photos and tell amazing stories about dilapidated Chinese amusement parks, severed Yak legs, rivers of garbage, his attempt at climbing Mt. Everest and how he tried to teach the Tibetans to make baloon animals. Hopefully he’ll be sharing these experiences online in the near future.

It is for no reason in particular that I decide to wear priest robes on the rest of the trip. I look ridiculious. People are staring at me and have no idea what to think. They just look like priest robes. It’s really a choir robe. Anyway, I’m wearing it and I like it. It’s comfortable. It’s keeping the mosqitos off me which is important as I’m not on anti-malarials and while I’m in Western China, there is a small chance of infection. They keep me cool and scare the shit out of children. I must look like Darth Fucking Vador. The robe is black and go past my ankles. The colar is like a priest color without the white middle part. It’s like a nehru colar. With my asian hat at a distance I look like something from the 15th century. My backpack has a pair of shoes hanging off it, a sleeping bag hanging off it, 2 jakets, a hat and another bag. I look like the top of a Gautemalan bus. I’m a walking junk store. I have enough balloons with me to start an international incident. 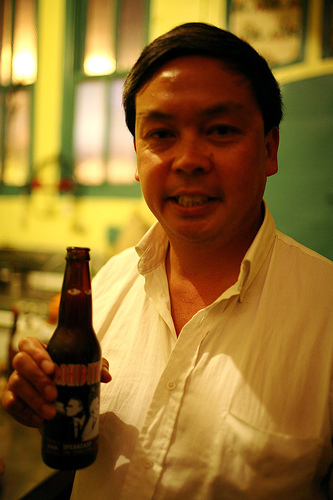 As an added bonus, eclectic San Francisco icon Frank Chu was there last night, hanging out after a hard day’s work spreading the word about the 12 Galaxies and so on. He was at the party without his trademark sign, jacket and sunglasses, just kicking back, enjoying a beer. Of course when I talked to him, he gave me an update on his latest media adventures. He’s still pissed at Clinton about something, but I forget exactly what it was.

Here’s a blog post that I wrote about Frank back in January, as well as some previous photos that I have shot of him over the last year or so.