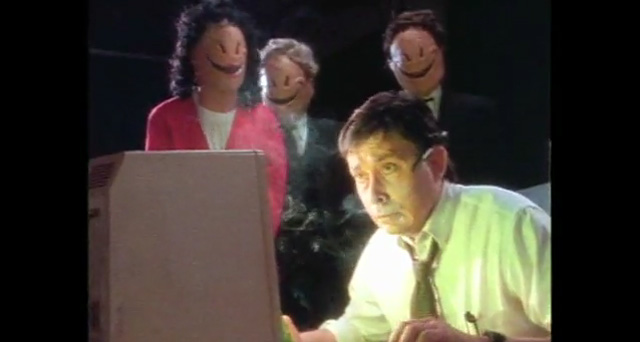 Rev. Bob being accosted by The Normals in the MTV commercial for The Church of the SubGenius

In 1991, The Church of the SubGenius leader Rev. Ivan Stang was commissioned by MTV to create a commercial for their Art Breaks series. Stang both starred in and directed this awesome piece which featured music by DEVO’s Mark Mothersbaugh and art miniatures and masks by the late artist, St. Joe Riley. While the commercial is a delight to watch, the “making of” video is even better with all kinds of outtakes, storyboards and behind-the-scenes footage. Nearly 21 years later, its message is still relevant, although I doubt MTV would back such a project these days. Interestingly enough, MTV has brought back its Art Breaks series in a Tumblr blog but with all new works.