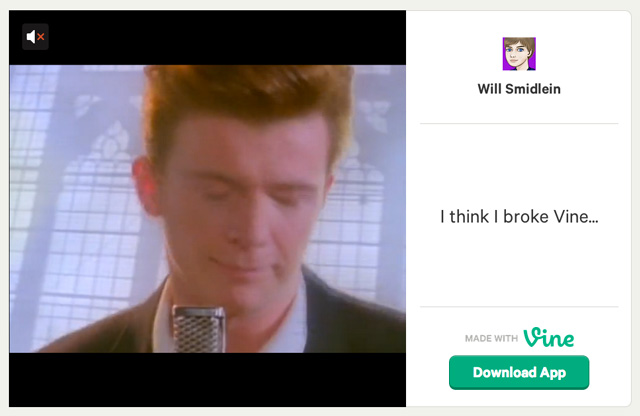 Cleveland, Ohio-based teen web developer Will Smidlein figured out how to post a full-length video on Vine, a video app that is built to max out videos at six seconds. He decided to bring back a popular meme, rickrolling, by using the 3-minute long video for Rick Astley’s “Never Gonna Give You Up”. He reports that the Vine has been taken down by Vine’s parent company Twitter.

I uploaded “Never Gonna Give You Up”, in it’s entirety, to Vine.Apparently it’s being fixed.

And it got taken down.Oh well, it was fun being internet famous while it lasted. I’ll wait for them to patch then write a post-mortem.

I truly feel awful for the engineers whose day I ruined with my stupid messing around.

Will tells his story in a post titled “I Think I Broke Something: The Story Of Rickrolling Vine“:

My site seems to be down (because I never assumed I’d gain any popularity this quickly), so here’s a mirror of the post I just wrote:

This afternoon, I was messing around with Vine, the app purchased by Twitter to make video sharing easy.

It’s become massively popular among my friends, so I figured I’d confuse them a bit by posting something longer than 6 seconds.

I tinkered around and soon found out how they were doing video uploads. A bit more tinkering later, and I was able to upload a file directly. I’ll get to the actual hack at a later date, once it’s patched.

So, I had this new power, and I wasn’t quite sure it would work. I threw the only video file I had encoded correctly up, and sure enough, it worked.

The tweet got a little bit of attention, but I later deleted it after a request from a friend of a friend at Twitter engineering. This was a courtesy thing more than anything else.

A few hours later, I went AFK for a few minutes, and had received congrats, kudos, and interview requests from personal heros and internet celebrities.

I had just ruined some poor engineer’s day.

I did my best to stop it, but once something is on the internet, it’s there for good.

I appreciate all the support, but I also ask that you think of the dude who forgot a final check on his codebase before uploading, because I’ve been that guy. It sucks to have the whole internet laughing at your mistake, and I hate that I’ve done that.

Vine is a really well built concept, app, and service. They’ve scaled wonderfully, and I hope that people like me don’t discourage them to continue doing great things.