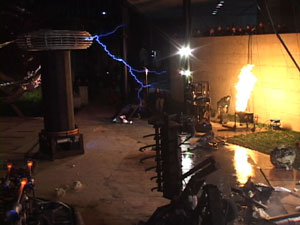 SRL will be performing live in the Los Angeles Downtown Arts District. Featuring the debut of the new Sneaky Soldiers, a remote controlled army of revolutionaries and recent addition to the SRL machine family. Also appearing, some of the old favorites along with the fabulous crew!

I’m shooting some photos of the setup and show, which we will posting here and on the SRL website.

UPDATE: Here are my photos from the setup and show.