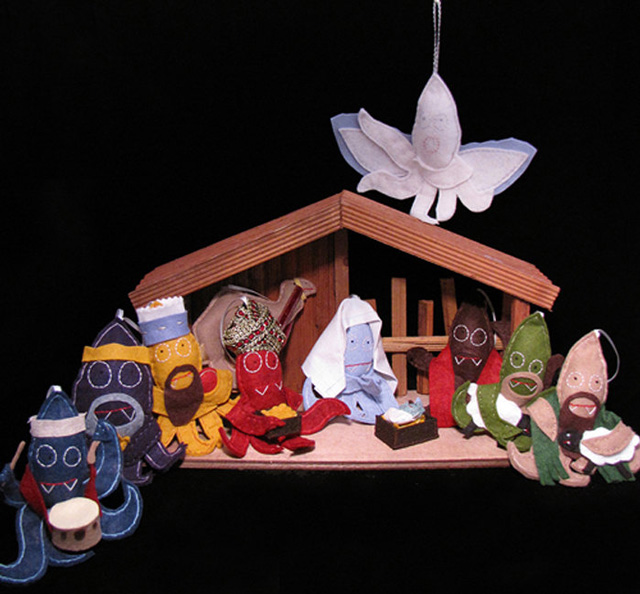 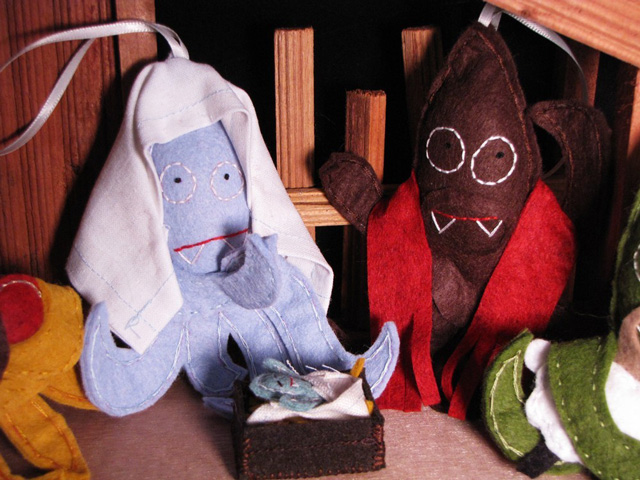 Crafter Bethany Hockenberry has created Squidtivity, a series of nativity scenes using handcrafted felt squids instead of the traditional people and animals. Bethany has been making the squid-filled nativity scenes since 2006 and sells them at her Etsy shop, Cleo Dee. Her animator husband, Scott Benson, created a quirky short video about Squidtivity called The Fifth Annual Squidtivity. We lasted posted about this husband and wife team in the post, The Adventures of Tadly Waldorfington, A Mimic Octopus.

Bethany on her inspiration for Squidtivity:

The squidtivity is a tribute to the nativity plays in the church I grew up in. It was a very small Methodist church with an organist that would fall asleep during hymns and at least one choir singer who was always off-key. Our nativity plays consisted of a fake baby snagged from the nursery and swaddled in a towel.

Scott describes Squidtivity in his own words:

For a half-decade now, my wife has been making handmade plush squid. No machines are involved – it’s all cut, embroidered and sewn by hand. Every holiday season, she rolls out the annual Squidtivity set. I remember the first year she made it, both of us worried that no one in their right minds would buy one. We were very, very wrong. The response we get every year is incredible, ranging from audible delight to absolute horror. Atheists love it. Devout believers love it (most of the time). Unaffiliated fans of squid love it. It certainly makes shows interesting.