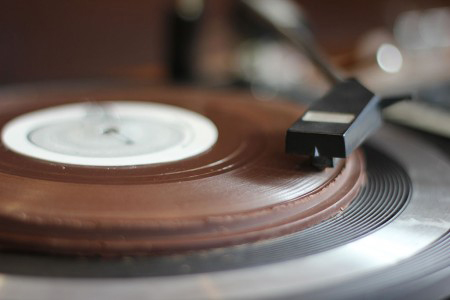 Scottish baker, Ben Milne of Fisher & Donaldson in Fife, has created a completely edible and playable music record out of chocolate. He developed it for his Edinburgh musician friends, FOUND, who have now released the delicious 7″ record in a very limited run. It plays their new single, “Anti Climb Paint”. The band has since recorded the corresponding music video in the bakery’s kitchen.

The idea came to baker Ben when he and his friends from the band decided to do something together. His first attempt saw him pour molten chocolate on to a regular vinyl disc, but he found out that it played the reverse of the song.

What he really needed was the same template that the vinyl discs themselves are pressed from.